ABIA GOVERNORSHIP TUSSLE:  PDP CHIEFTAIN SAYS HE WILL EXPOSE THOSE WHO LOOTED ABIA IN THE LAST ADMINISTRATION. 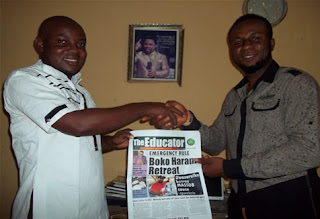 A Chieftain of Peoples Democratic Party PDP in Abia state, and  the traditional Prime Minister of Ibeku Ancient Kingdom, Chief Uche Akwukwuegbu, (aka Bawas) says he has the dossier of all those who stole money in Abia in the last administration and will expose them  if people who are blackmailing him in government does not stop.

Akwukwuegbu, who described himself as an accomplished Abia based business man, politician, and construction magnet”, said that he played a prominent role in the administration of Chief Theodore Orji, and did some government approved construction works for the state to the tune of two hundred and Fifty Million but was denied payment.

He said that the recent pronouncement by a group that call themselves Ibeku Consultative Forum, that he has ceased to be the Traditional Prime Minister of Ibeku will gear him towards exposing their roles during the last administration.

Akwukwuegbu said that he incurred the wrath of the Forum because he is supporting the governorship bid of Dr Sampson Uche Ogah as Abia Governor following an order Court that Ogah be sworn in without delay.

The Traditional Prime Minister, who alleged that their action was based on selfish reasons, threatened that he has their dossiers as people who looted Abia treasury and will expose them if they don’t stop in their efforts to tarnish his dignified position as the traditional prime Minister of Ibeku land.

“One of them was made permanent secretary in a Ministry where he was not supposed to head. He did not read science, but sociology, and the law gazette at Ministry of Health stated  that a Doctor or somebody that read science or science related course should be a permanent secretary in  the Ministry of health but the last government threw caution to wind and made him a permanent secretary in a ministry he is not supposed to be in ,  just because we do thing in a  leftist style in this state, is he the type of person that will come and talk about my position in Ibeku land, someone who is not even a Chief in Ibeku land”,  Akwukwuegbu queried
He went further to say that another, who formerly worked in ASUBEB, and is now lobbying to be a T.C Chairman and is in also in the pay role of the government, is also calling him names.  “I don’t want to sue them, because I know that none of them can pay my bill and some of them who are elderly should try to respect their old age so as not to push me into insulting them.

“They should be warned, I have more facts to release if they don’t leave me alone, some are taking two million from Abia state coffers every month , some are taking more than that, while some bought Range Rover  jeeps. I know all of them, where their buildings are, can you imagine that a level four officer in this state, is  building hotels everywhere, I know them, those that are driving Range Rovers, I know them, even the tax officer  that is building estate in Abuja, I know them, I have their dossiers. They should leave me alone or I will uncover their nakedness.
What about the permanent secretary who is building hotel in Cross River, Abuja etc, I know where he is building it. Where did they get all these money, is it not the Abia fund that they looted and they are walking free, people who should be behind bars for one criminal activity or the other, talking about my Prime Minster ship. I have photo copies of every transfer they is made, I know how they looted Abia money, they should leave me alone”, or I will expose them”, Akwukwuegbu warned.
“What I am fighting for is for their benefits because all of us can not be in one platform, I don’t hate Ikpeazu as a person, but I am not the tax officer that paid his tax, neither am I the judge or F.N.Nwosu that discovered his tax inefficiencies and sued him. I am just an ordinary person, Ngwa people have not killed F.N.Nwosu, why must some Ibeku people be after me. If Ibeku people want to discard me, it is not a matter for seven or eight people. We have prominent Ibeku sons, like the former speaker, Ohajuruka, former Minster who is the son of J.T.U.Aguiyi Ironsi, Chief B.B.Apugo, Ochiagha Ibeku is an Ibeku son, former perm Sec, Nwaobiara, former General, Onyemaobi and many other prominent ibeku sons. There are a lot of Ibeku sons who can say ok because our son has committed this or that lets look into it and  set up a panel for him to be called to defend himself and they will tell me my offense, before they would advise Ogurube if he would accept it or not. Not a forum of two or three people who will sit in their parlor to hold a meeting and come out to talk about gazetted prime Minster of Ibeku, Royal Prime Minster of Ibeku. All Prime Ministers in Ibeku and the whole of Abia are in support of me.
When Ikpeazu came for blessing s from Ibeku people, I was the one that administered the blessings of Ibeku on him by pouring libation for him to go as a PDP man to win the election. When he came back from the election, I was the one that broke the cola nut and poured libation; they were all there and saw me as the traditional prime Minister of Ibeku land. If you check Ogurube magazine, you will see my write up and picture as Prime Minster, even in Ibeku Egwuasaa calendar.  My Prime Minster is not in contest with any one.              The one who said that I am a choir master is looking for job; he has been sacked two times and brought back two times by the government, so I don’t want to talk to him. He is walking round the four corners of Government house to be recognized.
Ibeku secret is older than any forum, how can one form a kangaroo Union and say that they are discarding me as a traditional Prime Minster.  Even the drink they took to Ikpeazu when he became the governor, they bought it from me, and they have not paid up till now. Just because they are expecting one post or the other, they want to talk about me, I am not a Government employee, and I am a businessman. I did my work for government to pay me, if they don’t want to pay me, they should allow me to rest”, Akwukwuegbu warned.

The Aba Landlords Protection and Development Association (ALPADA) said that it will disconnect their members numbering over four thousand consumers from Enugu Electricity and Distribution Company EEDC as a result of issuance of bills not commensurate with power supplied.

They also gave the company ultimatum to install prepaid meter in the houses of their members on or before October 31, 2016 or else they would drag them to court to seek redress.

Speaking to The Educator on the notification they gave to the company on the issuance crazy bills to their members, the President General of the Association, Chief Alphonsus,.E. Udeigbo, who was in company of  the Secretary General, Chief Ben Obiji, said that they have notified EEDC of their intentions through letters.

According to Udeigbo, the letter which they sent to the company was also copied to President Muhammadu Buhari, Governor Okezie Ikpeazu and the Chairman of Nigeria Electricity Regulatory Commission, Abuja.

He   said that they took this step to forestall the Company's unwholesome practices of giving estimated, spurious and crazy bills to both metered and unmetered consumers who are members of their association.

Speaking on the demand they made to, he said that they requested that all electricity poles, cables and transformers that are damaged, which they ask customers to pay for during repairs   must be repaired by the company without charging consumers.

“The company should stop billing consumers for electricity not supplied as a result of breakdown of transformers or fault in distribution. The main thrust of electricity power sector reform act of 2005 demands for better electricity for economic development, and called for elimination of all unwholesome practices in power sector, and EEDC has refused to comply with normal supply and customer billing in Aba, Abia state.

“We are aware that the meter reading, billing, cash collection and credit management for electricity supply regulation 2007, tasks your officers to obtain the actual reading of meter before billing for electricity consumed”, but decried that the   officers, would   instead of reading meters to give bill send estimated over bloated and crazy bills to customers who have installed meters in their houses."
The Association observed that residents of Aba are now wiser and will no longer tolerate to be subjected to fraudulent practice, hence their demand that every connected premises in Aba be installed with prepaid meter on or before October 31, 2016.

Other demands they made are that increment of tariff be stopped until prepaid meters are installed, and that consumers be credited with excess charge on bills issued on account of estimated bills from October 1, 2010 till date.

They also tasked EEDC not to tamper with the account of any of their members from the era of NEPA, PHCN and EEDC from 1990 till date, among other demands.
ALPADA warned that if their demands were not met, they would disconnect over four thousand of their members, embark on protest around Aba metropolis, expose the unwholesome activities of the EEDC and seek legal redress through court.

The father of super Eagles player Emmanuel Emenike was buried on Friday 19th June 2015 at his country home Njaba in Imo State. 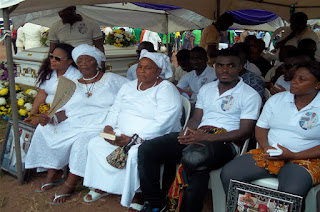 From right: Emenike's sister,Emmanuel Emenike, the mother, father's sister and the sister at the funeral. 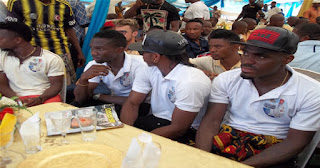 From right: Emenike, Joel Obi, Onaze, and Omerue at the funeral. 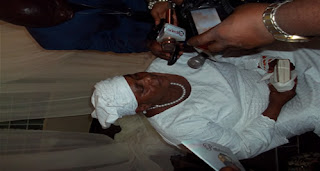 The Mother in an interview with the journalist.

Emenike in an interview with the journalist. 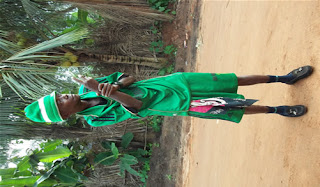 one of the villagers displaying as a footballer in honour of Emenike.

Posted by Henry Uwalaka TheEducator Media at 8:33 pm No comments: Links to this post 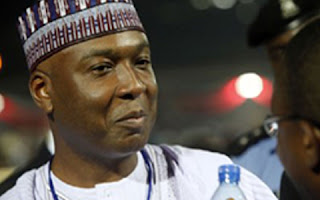 Senator Ahmed Lawan(Borno), who emerged the consensus candidate of the All Progressives Congress, was not nominated.
Details later... 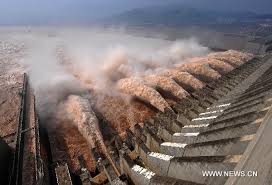 Among the victims, five drowned, two were struck by falling rocks and two were buried under landslides. The last was killed in the collapse of a building, according to the ministry.

In Guizhou Province, where torrential rain has left four people dead and four others missing, more than 10,000 residents have been relocated and nearly 6,700 are in need of basic necessities, according to statistics from the provincial civil affairs department.

Downpour has also affected 553,900 residents in seven cities and prefectures in Hunan Province, according to the provincial flood control and drought relief headquarters.

Posted by Henry Uwalaka TheEducator Media at 3:38 am No comments: Links to this post